Thorpeness teams up with Peter Finch and The Jazzy Golfer

Thorpeness Golf Club and Hotel is pleased to announce a new partnership with Peter Finch and The Jazzy Golfer, two of the most popular online personalities in the world of golf.

Brad McLean, General Manager at Thorpeness Golf Club and Hotel, said: “We are excited to be working with Pete and Jasmine to shine a light on Thorpeness as one of Britain’s best places to take a golf break.

More people use mobiles, tablets and apps now than read magazines or newspapers, so it makes sense to team up with two of the most watched digital influencers in golf. Pete and Jazzy have big plans and lots of fun in store, so check out their channels and subscribe to follow all their adventures on the Suffolk Coast this Summer.”

PGA Professional and YouTube sensation Peter Finch will be filming a brand new series of instructional videos at Thorpeness and broadcasting them over an eight week period in July and August to his 200,000+ subscribers.

You’ll be able to pick up helpful hints and tips to improve your game, from driving it straighter to holing more putts, all while enjoying the backdrop of our James Braid designed championship heathland course.

Pete’s coaching videos, equipment reviews and travel vlogs attract around 1.3 million views per month on his YouTube Channel and it’s a great place to get your golfing fix for free.

Throughout the Summer, Pete’s followers will have the chance to win exclusive prizes, including a stay & play golf break for four people at Thorpeness.

In early September, Pete will be joined by Jasmine for a unique head to head challenge weekend at Thorpeness Golf Club and Thorpeness Country Club.

Jasmine only took up golf in 2017 but has fallen in love with the game and has quickly become one of the UK’s biggest advocates for growing the women’s game.

You can currently find her presenting on the European Tour’s and Ladies European Tour and she has recently been named as one of the official presenters for the 2019 Solheim Cup at Gleneagles.

Showdown in the Suffolk Sun

The bragging rights won’t just be settled on the 18th green as Pete and Jazzy will be taking on lots of other fun Thorpeness themed challenges including mini-golf on our Jiggers putting course and boat-racing on Thorpeness Meare.

To follow our partnership with Pete and Jasmine throughout the year, sign up to our social media channels to watch all of their exclusive and amazing content from our sunny corner of the Suffolk Heritage Coast. 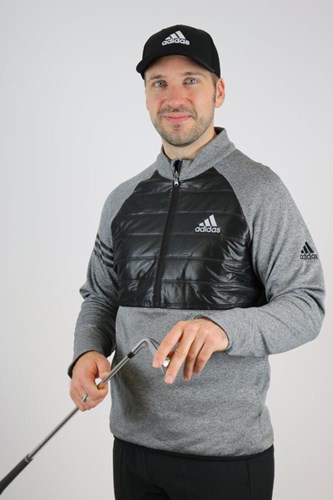